Festivities, fireworks and refuse: the aftermath of the Family Fourth

By Alicia A. Halberg

As patrons stopped by their local Starbucks franchise to pick up their morning cup of joe, many Starbucks employees and area volunteers instead spent their workday picking up trash in the sun. 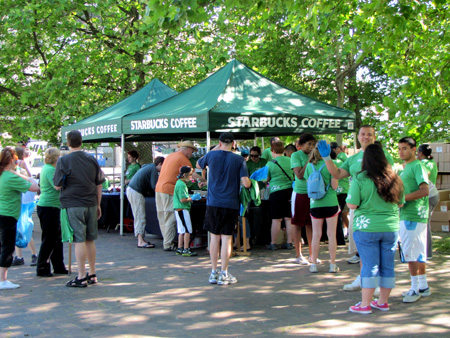 Starbucks check-in and snack tables perched in the corner of the Gas Works Park parking lot. Over 700 volunteers checked in at 3 different locations around Lake Union on July 5.

They covered the hills and surrounding areas of Wallingford’s Gas Works Park the day after the Family Fourth, which had featured the Lake Union fireworks display and a concert, picking up litter from the previous night’s crowds. 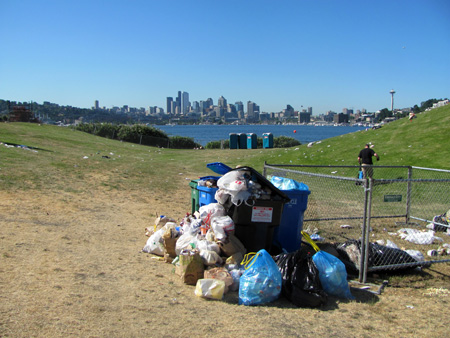 A garbage pile waits for pick up where thousands of spectators watched the fireworks show less than 24 hours before.

“I was just disgusted by the amount of trash,” said Carol Meadows of Bothell. She drove to Gas Works to help out after seeing a sign at her local Starbucks about the cleanup effort.

The program, sponsored by Starbucks, was created last year.

“Last year this swell was happening to save the fireworks,” said Andrea Buckmeier, marketing manager for Starbucks. “We wanted to know what else we could do; we wanted to help the neighbors.”

“If you throw a party, then you have to clean up after it,” said Shannon Donohue, marketing director for Starbucks.

The Family Fourth show was also sponsored by Starbucks.

Kang Min Moon and Kohei Mori, exchange students at the University of Washington, enjoyed their first Independence Day celebration last night at Gas Works. They also came back to help clean up.

“I was surprised—there were so many people there!” said Moon, of South Korea.

Nancy Trejo, a Starbucks employee, had never been to Gas Works Park before volunteering with the cleanup effort.

“I thought I would see more of my coworkers out here,” she said. “This volunteer opportunity was made available for us as employees.”

Mid-way through the cleanup, organizers said they had more than 700 volunteers between their three locations on Lake Union. Considering it was a workday, organizers were surprised to have so many helpers.

“There have been a lot of families and groups showing up together,” said Buckmeier. Last year’s cleanup had roughly 800 volunteers. 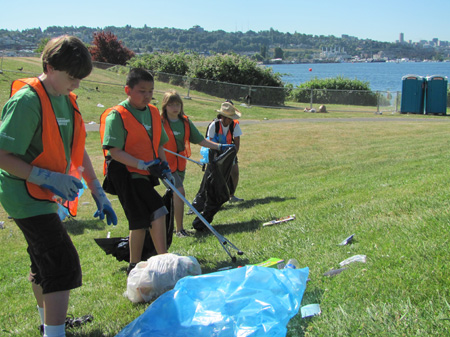 Youngsters from the Campfire USA Olympic View Kids’ Club learned about community responsibility through helping with the clean-up effort.

“I wanted to make them aware of community responsibility,” said Merrill. “They’re surprised about how much litter there is.”

“It’s fun, but it is hot out,” said Savannah Kanis, a sixth grader with the Campfire group.

Everyone fondly reminisced about the fireworks they saw the night before while picking up litter.

“I liked the smiley face ones,” said Hailey Wayne, a fifth grader with the group.

“How do they make those smiley faces?” wondered Donohue. “I loved the choreography between the music and the fireworks.”

“Next year I want to go to Gas Works to see the big ones,” said Hailey’s brother, Bryon Wayne.

Volunteers were treated to free T-shirts, scones, milk and coffee for breakfast as well as boxed lunches in the afternoon. 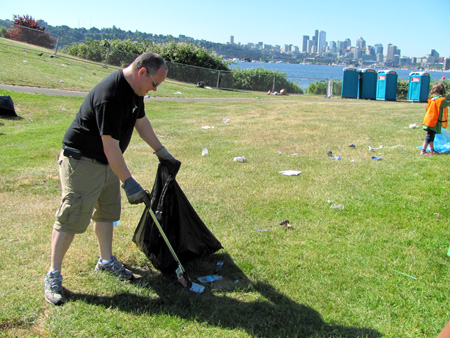 “I enjoyed myself last night, I figured today I could do my part,” said volunteer Ray Newman.

Ray Newman came to the park before check-in began at 9 a.m. to help with the cleanup.

“My wife was preparing to go out for work when I saw the clean-up on the morning news broadcast,” said Newman. “I offered to drive my wife to work so I could go out and help.”

According to Starbucks, last year’s cleanup rendered 1.15 tons of garbage from area parks as well as from a Kayak-powered cleanup crew on the lake. This year’s results were scheduled be announced later Tuesday.

When asked about the weirdest thing they had found that day, the Campfire group responded: “We found a flip flop and a sock, as well as purple underwear!”

This service venture was one of many for Starbucks, which helped with projects at John Muir Elementary and Franklin High schools in April. Even during one successful event, organizers have their eyes on the future.

“We’re having a school-supply drive in August,” said Buckmeier. “On the first day of school we will distribute supplies and bring free coffee to the teachers.”

It seems that the Family Fourth cleanup, after two successful years, will continue as a tradition.

“I enjoyed myself last night,” said Newman. “I figured that today I could do my part.”

(Contributor Alicia Halberg is a student in the University of Washington Department of Communication News Laboratory.)