Seattle is home to a handful of fearless bikers furiously pedaling against rain, hills, and traffic; however, with the work of neighborhood community groups, Wallingford will soon be providing safe and enjoyable pathways known as Greenways, for bikers and pedestrians who seek a less intense experience on their way to work.

“I didn’t get serious about biking until I lived in Sweden with my family. We came back to Seattle four years ago, and I thought I could keep on not owning a car, but I did not feel safe not having a car with my kids who were eight and thirteen at the time on the road. I think that motivated a lot of what I did,” said Cathy Tuttle, founder of Spokespeople, an advocacy group for bike facilities in neighborhoods that organizes rides for newer riders.

Neighborhood Greenways allow safe passage for children, bikers, and walkers to commute to parks, schools, and other popular destinations without the hassle and risk of high-trafficked streets.

An example of Portland’s bike boulevards

“The whole idea for Greenways was [for them to] be one street off from the main arterial, located close to businesses and places people like to go to. If I’m walking, I don’t want to be on an arterial, I’ll walk one street down, but not on 50th, I do not want to be in all that car exhaust,” said Tuttle.

Since Seattle does not have any existing Greenways, community members are working hard to create Greenway maps and plans that will bring the most benefit to its residents. The Wallingford group has had two meetings in the last month and a half to work out logistics as the Seattle Department of Transportation has chosen its routes for building. 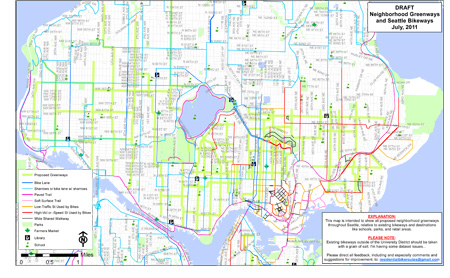 A draft of Neighborhood Greenways and Seattle bikeways. Click here for larger version.

The Wallingford Greenway will be about a mile long, running from I-5 and along 44th, crossing Burke Ave N to 43rd going south to connect to Stone Way. Plans are to build beyond Stone Way to the next street up to create a north and south connection to Midvale.

“Most trips in cars we could do by biking or walking to them if we were comfortable doing it,” said Tuttle.

Wallingford residents as well as the Wallingford Chamber of Commerce are thrilled to be the example of Seattle’s very first Greenway, according to Tuttle.

“Once people get the idea and understand that parking is not going away and that streets will be more pleasant, businesses and residents are happy to be part of that neighborhood [that has a Greenway],” she said.

Tuttle estimates that by December, Wallingford will have a working Greenway that the neighborhood can take pride in.

Residents in Northeast Seattle, Ballard, Beacon Hill, and the University District are also in the process of mapping out how to connect their entire neighborhood through Greenways in the near future. Funding for these projects varies: Seattle Children’s Hospital is footing the bill for the construction of Northeast Seattle’s Greenway, while Beacon Hill received a neighborhood grant last year. Ballard and the U-District have also been in meetings recently.

Although some residents might fear the loss of parking, Tuttle said Greenways would not change the roadway other than to make it slower, which is generally an agreeable addition for families and residents to have a quieter street. Some communities may choose to decorate their Greenway with art or plant trees near the street.

Greenways or ‘low-stress roadways’ as they are called in Portland, provide an affordable solution for biking infrastructures that would otherwise be costly to the city, said Tuttle; one more reason why Portland has adamantly adopted these Greenway projects.

Portland’s expansive Greenways provide a model for what Seattle Greenways might one day become. In the next three years, Portland hopes to have every neighborhood attached to Greenways; amounting to 20 miles a year.

For more information on Greenways, visit the Sally Bagshaw blog or contact Cathy Tuttle at cathy.tuttle@gmail.com.