Updated: Police and medics responded to a report of a man stabbed in the back at the 7-Eleven at Stone Way and N 40th St. just after 6 p.m. 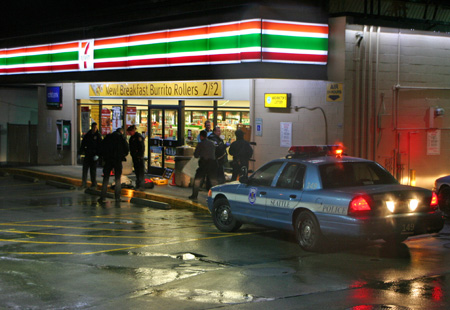 Police say the stabbing was the result of a fight between a man with a crowbar and a man with a knife. The victim, a man in his 50’s, was treated just outside the front door of the 7-Eleven and rushed to the hospital. He’s expected to survive his injuries.

Police are looking for the suspect, believed to be driving a white Mustang with a female front seat passenger. The Mustang had at least two windows smashed out by the subject wielding the crowbar. Other than the vehicle, officers say they don’t have a suspect description.